The project, proposed for the former Giesche Shoe site and the Village owned parking lot at 418-424 N. Main Street, features a mixed use building including 8,844 square feet of first floor commercial space and 107 luxury apartment units on the second through fifth floors. Additionally, as part of the project, a two story parking garage will incorporate public parking on the first floor and residential parking on the second floor. The parking intended for public use will replace the existing parking on the site to include a total of 137 public parking spaces. 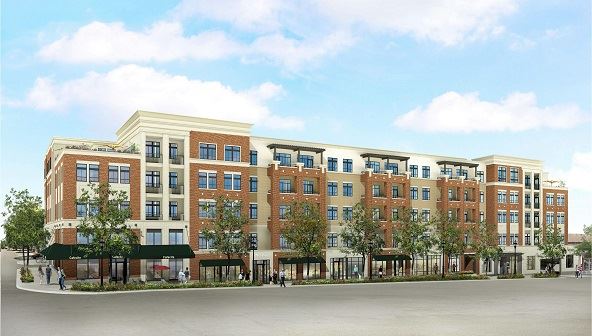 The petitioners requested approval of a Special Use for a Planned Unit Development and Exterior Appearance approval to construct a five-story mixed use development on the Giesche Shoe property and the Village owned parking lot, generally located at the northwest corner of HIllside Avenue and Main Street.

During the Final Planned Unit Development approval process, the Plan Commission and the Village Board review if the final PUD plans are in substantial conformance with the approved preliminary Plans. The purpose of these meetings are not to reconsider the special use/zoning entitlements which were previously granted under the preliminary plan approval.